The way I see the 2016 election  shaping up, it’s going to be determined by which party has the fewest defectors. If the number of Republicans who have some decency and sense of honor and either do not vote, or choose to reluctantly vote for Clinton, outweighs the number of fanatical, uncompromising, Lefties who want to commit progressive suicide by hopping on the #NeverHilary movement, then we will be OK.

It is bad enough that I am looking at a country in which the members of one major political party seem to have gone mad, running a nouveau-Fascist, racist, sexist, bigot for President… but now I get to watch my beloved progressive movement commit elective hara kiri out of a rabid and irrational hatred for an establishment Democrat.
I feel as if the whole country is going mad. It’s like I went down the rabbit hole and am now in some alternative world in which rationality is nowhere to be seen and anger, hatred, vitriol, and polemics have replaced any kind of normal behavior.

I see myself as a progressive. I have supported Bernie Sanders from the start. The legislative agenda I favor would be considered radical compared to the incremental approach, which I feel has largely failed. But I am also a realist. Politics is the art of the possible. Substantive change normally requires a long term commitment, moving the ball forward in any way you can. Sometimes that requires compromise with people or groups with whom you do not agree but can find enough common ground to accomplish some particular goal. Fanaticism is always a destructive force. It creates divisions, it is exclusionary, it wrecks things without replacing them with anything positive.

I simply cannot comprehend what is happening with the folks on the Left that I had thought were my “peeps”. Many are revealing a fanatical side that I had not seen and do not share. Their inability to deal with the fact that the “founding fathers” intentionally built in a certain amount of inertia into our system is going to destroy our movement.
The people in our society who have made positive change happen are not the radicals on the street, the activists, the demonstrators, the ones out on the barricades. The radicals, virtually by definition, do not have the power to change things. It is the “establishment” that has the power. To crate change, one has to win over enough of the establishment to accomplish that change.

The New Deal wasn’t created by the Labor Unions or the Bonus Marchers. It wasn’t created by the radicals out fighting with the security forces. It was created by a President and Congress many of whose establishment members had been won over to the belief that something had to be done to radically change the direction of the country. A fear of revolution may have been the impetus, but it required members of the establishment to be converted to the cause.

The Civil Rights Act was passed by a bunch of establishment white folks. The impetus may have been Dr King’s “Movement” but it was the folks that held power who had to be won over. Dr. King understood this completely. He viewed his job as acting as the conscience of the nation, pushing and prodding the establishment to act out of a sense of national embarrassment concerning inequality and repression of his people. But Dr. King understood he needed those establishment types in Washington to see that their interests coincided with those of the movement.

The vilification of the establishment that I see from both the far right and the far left may be based on legitimate concerns over the various serious issues which the country faces. But people are acting like what needs to happen is to scrap the system and start over. With what, no one can actually say. How positive change is going to happen when the methodology is largely negative and destructive doesn’t seem to be a consideration. It’s all throw the bums out, break it all down. The total disdain for 300 years of our institutional development seems equal on both the left and the right.

Bernie Sanders will not be the Democratic nominee for President. I am sad, I am disappointed. But, to my mind, that fact means that it is time to keep my eyes on the prize. The greatest threat to the country that I would like to live in is Donald Trump. A Trump Presidency could be the biggest disaster for our nation since its founding. He embodies virtually every single negative trait our body politic possesses. He is fearful, angry, aggressive, bigoted, insensitive, merciless,  and cruel. He has absolutely no experience relative to the job. His entire personality points to an admiration for dictatorship and “strong man” style leadership.
Hillary Clinton is the quintessential establishment Democrat. She is also the most accomplished female politician in the history of the country. In a society in which women cannot get ahead unless they understand how to play the game with the boys, she has prevailed. Toe to toe with some of the most vicious, unprincipled politicians in our history and she is still standing. This is a woman who knows how to get things done.
At this very moment, Hillary Clinton needs our progressive support to win. This is exactly the time when the interest of the establishment coincide with our interests. This is the moment when the establishment Democrats can actually be pushed towards the left. Right now, when they need us. And this is precisely when so many of my fellow progressives have decided to make themselves TOTALLY irrelevant to the process by refusing to work with the establishment Democrats. By adopting the #NeverHillary position progressives force the establishment Dems to focus more on trying to win over disaffected Republican voters than try to woo progressives. This irrational and uncompromising position guarantees that the party focus move towards center-right rather than towards any progressive agenda which we have said we supposedly felt so strongly about.
This is the best chance we are likely to get for many years to move our progressive agenda forward. Right now the collective interests of the establishment Dems and the Progressive Dems coincide. This is when we can get a more progressive platform for the party, this is when we can get commitments from Clinton to appoint more progressives to her administration, this is when, by uniting the party, we can get more progressives elected down ticket and possibly take back Congress. Right now, this instant, when the GOP is running a crypto-Fascist, racist, misogynist, narcissist. This is our chance.

The #NeverHillary position is a form of collective suicide for the progressive movement. A kind of electoral Masada in which we jump off the cliff rather than be captured by the “establishment”. I simply cannot comprehend why any thinking progressive would believe that this is a good idea. The result will absolutely not move the progressive ball forward and it could easily lead to a Donald Trump victory. 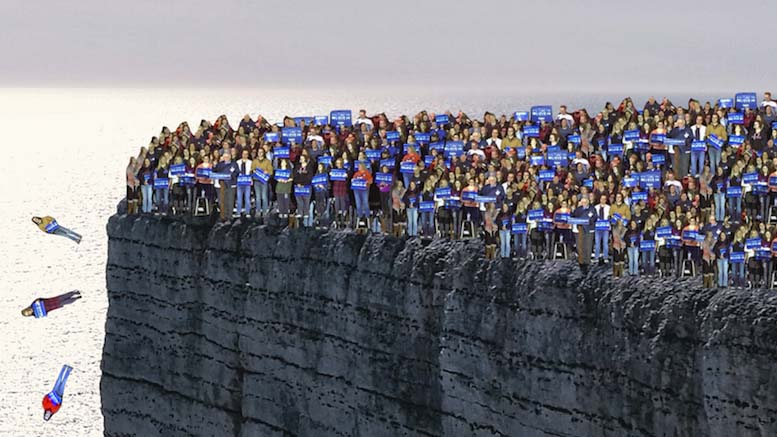 Read the  above article – this is my response

I think this is a totally bogus number. It might be accurate if you are talking about first time voters who only got involved because Bernie was running. But I know lots of Bernie supporters and we are all voting, somewhat reluctantly, for Clinton. What is the point in turning this election entirely into a Clinton vs Sanders election with absolutely no reference to Donald Trump? This anti-Clinton vitriol is irrational. It suggests the same kind of irrationality that the vicious anti-Obama folks exhibit. I have to say, I don’t get it. People are acting like it’s some kind of huge conspiracy that an “establishment” candidate has gotten the nomination. Establishment candidates almost always get the nomination, on both sides. Trump has only been able to pull it off because he was largely self financed at the beginning and was able to say all those offensive remarks without losing his financial base.

OK It won’t be this election in which we rapidly change the direction of the country. OK We will have to actually work to build the movement until it “becomes” the establishment. OK We were a bit disappointed that Obama couldn’t change things more (which might tell us something about how hard it is to do so). We need to understand that this is a long term effort. It needs to be pursued at the state and local level. It needs to be aggressively focused at the Congressional level.

Clinton is in no way shape or form the horrible disaster that some people are picturing. She is simply business as usual. Get over it. We’ll do even better next time. But with Clinton, we get to start our efforts at least at our current baseline, and I actually think she will move the ball forward in many ways. I question the rationality of any progressive who thinks that Clinton will not be better than Trump. On what planet our you living? There is absolutely no way that, based simply on the stated proposals of both candidates, it can’t be abundantly clear that Trump will not just oppose any progressive movement but will actually do his level best to take us backwards. His racial bigotry alone should be enough to decide you.

I simply cannot believe that this type of fanaticism, even when it is a fanatical belief in principles that I support, is representative of the new progressive movement. If I really thought that this is what progressiveness is about, I would have to disown it as a movement. Idealism when combined with fanaticism gives you the Cheka, the Gulag, the Cultural Revolution, Pol Pot. There should be no place for this type of fanatical behavior in our movement.

We need to build on our victories so far, which have been substantial. Find our next Bernie Sanders and groom them for the job just as Clinton has been groomed. If we really do represent the majority of the country, as we consistently maintain, then in our democracy, we should be able to make this happen.

But in the mean time. we ABSOLUTELY have to keep Donald Trump out of the Presidency. This is a dangerous man. He is capable of anything he deems to be in his own self interest. I truly believe that this must be readily evident to my fellow progressives. I cannot believe that the kind of numbers that this article puts forth are anything other than a complete fiction, bordering on propaganda. If I thought that Donald Trump was this sophisticated, I would suspect that it was actually a piece of Trump developed dis-information because this type of attitude only benefits Trump, not the movement, not the Dems, not anyone else.